Looking Ahead To MLS's Attendance In 2011

Share All sharing options for: Looking Ahead To MLS's Attendance In 2011

With less than twenty-three days until the kick-off of the 2011 regular season for the MLS, we take a look where the league has been and what is to come for the its attendance and ticket sales. Entering the sixteenth season, the league looks to draw more fans, season ticket holders and increase its average attendance across all of its markets.

Without doubt, Major League Soccer is set to have its largest season yet. The introduction of expansion clubs, Vancouver Whitecaps and the Portland Timbers as the 17th and 18th clubs, provides an opportunity for an increased number of matches (per club and overall) as well as an increase in attendance and ticket sales. The hope is that the significant gap between last year's 240 matches and the upcoming 306 matches will not dilute the market, retaining the same number of fans throughout the extended season while lowering average match attendances.

The addition of two key soccer markets will potentially enable the MLS to draw, for the first time, over 5 million fans during a regular season. During the 2010 season, the MLS had barely broken through the 4 million barrier. It is a statistic that may come close to doubling since the inaugural 1996 season. 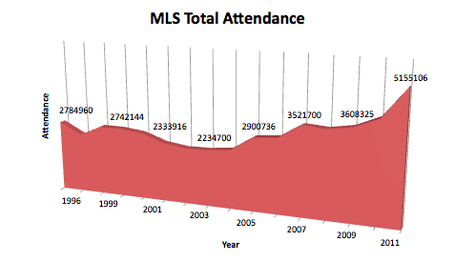 If recent trends are an indication to future success, the league may double this stat as early as 2013 (assuming a 20th club is introduced in a new market). With the discussion of the twentieth team revolving around a second club in the New York market, MLS may cannibalize its own sales from the Red Bulls based in Harrison, N.J.

In 2012, Major League Soccer will introduce its third Canadian team, the Montreal Impact. Though a current club as a part of the North American Soccer League, Montreal hopes to expand its fan base during the transition into the MLS while creating an rivalry among the Canadian clubs.

Each club has been drawing, on average, 250,000 fans to its home matches in recent seasons. Two additional clubs and a longer regular season (extended to 34 matches) provide an opportunity for Major League Soccer to average over 285,000 fans attending each club's home fixtures.

For additional statistics, refer to the table below. Click to expand the table in a new window. 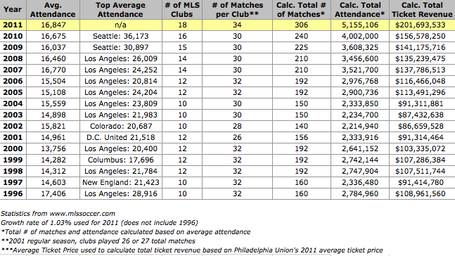