Share All sharing options for: World's Top 20 Most Valuable Clubs

It is that time of year, again - the time when Big 4 accounting and consulting firm, Deloitte releases its annual report on the 'Football Money League.'  The report profiles the highest revenue generating soccer clubs from around the globe for the previous season - in this case 2009-2010.  It is a collection of information that is so unique to this report. Some clubs, such as Los Blancos of Real Madrid, are comfortable disclosing financial details.  However, not all clubs are so keen to allow the public to be privy to their finances.

This is where Deloitte steps in, using its own sources at each of the clubs.  The breakdown of revenues consists of matchday sales, broadcasting contracts and commercial income. One of the more interesting figures, is how this breakdown not only varies by club, but by league.  In the Barclays Premier League, the majority of teams can expect 30% of revenue to be derived from matchday sales, another 30% from commercial contracts and the remainder from broadcasting income.

In the Serie A, it is common for over 50% of a club's revenue to be generated from broadcasting.  AC Milan generates 60% of its income from broadcasting and as little as 13% from matchday sales.  Though not a flawless indicator, Italian-sides Inter Milan, Juventus and AS Roma follow suit with 62%, 65% and 53% respectively.  Juventus draw just 8% of revenue from matchday sales.

The broadcasting section is derived from television and internet sources.  Often matches are televised via premium packages (i.e. Fox Soccer Channel in the United States) or are made available online, on-demand via websites (i.e. FoxSoccer.tv and ESPN3.com).  A club's broadcasting rights and contracts are complicated further by their respective league (i.e. La Liga), controlling body of the sport (i.e. UEFA) and the additional tournaments (i.e UEFA Champions League).

Matchday revenues is a direct result of the number of matches a club competes in.  The impact of league play and additional tournaments (and the success in these fixtures) correlates with the amount of income generated.  It apparent that ticket revenue is the only component of matchday revenue.

Commercial income is sourced from corporate sponsorships and club merchandise.  The popularity and demand of each club is what differentiates a Real Madrid from an AS Roma on Deloitte's list.  Real Madrid, for example, has become a global brand as a result of their long history and continued success in La Liga and the prestigious (and globally televised) UEFA Champions League.  Becoming a global club is attained not only through success but also through a club connecting with the larger markets.  In the off season, clubs travel, for example, to Asian markets which present the largest opportunity for growth of sport and club.

"We expect a battle between Spain’s two superclubs for top spot in the Money League for the next few years at least." - Deloitte, 2009/10 Football Money League report 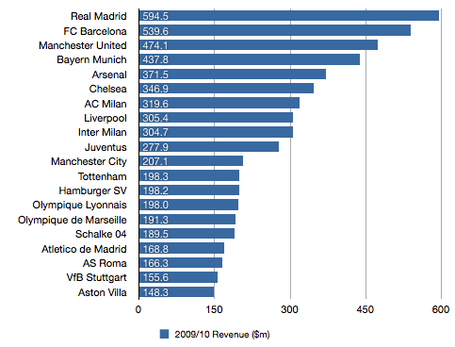 The Premiership takes the title of having the most teams in the Money League with 7 clubs.  Serie A and the Bundesliga follow, each with 4 clubs.  The league with the top 2 richest clubs, La Liga, follows behind with 3 clubs and France's Ligue 1 with just 2 clubs.

"It is testament to the ability of English clubs to capitalise on all revenue streams that they occupy seven Money League positions, the most of any individual country – including six of the top 12 position." - Deloitte, 2009/10 Football Money League Report