Share All sharing options for: Using Soccer to Fight Cancer

Soccer in the United States has seen various promotions of fundraising campaigns to fight disease and benefit communities.  Major League Soccer held Breast Cancer Awareness Nights with each club throughout the month in October 2010.  Special edition, pink adidas Jabulani balls were used during matches, in addition to pink Gatorade towels, goalkeeper gloves, sweatbands, patches and signage around the stadiums. All of this was made possible through the MLS W.O.R.K.S program, which develops soccer fields in urban locations and communities, promotes sustainability in soccer, and supports community service throughout the regions which the MLS impacts.

However, the impact has been limited to its resources and has yet to duplicate the impact of leagues such as the NFL and NBA, nonetheless that which LIVESTRONG has had on the world of cycling. LIVESTRONG became a brand overnight; one that athletes in every sport wanted to be a part of. A new initiative to fight cancer, Red Card Cancer, may be able to replicate the success of LIVESTRONG, in the world of soccer.

In a recent interview with Jared Ferreira of Red Card Cancer (RCC), we discussed the mission of the organization and the impact RCC will have on the soccer community and, more importantly cancer research.

In the summer of 2009, Paul Payne (Head Men's Soccer Coach, Bloomsburg University) came up with the idea to create an initiative to raise money for cancer research after the passing of Charlotte Moran (Executive Director, EPYSA) and one of his best friends, Joe Bochicchio (Head Coach of the Scranton University Womens Team). Joe had been one of the first coaches Paul assisted and someone he grew very close with over the years prior to losing a battle with melanoma. Charlotte Moran passed away after a two-year battle with pancreatic cancer. 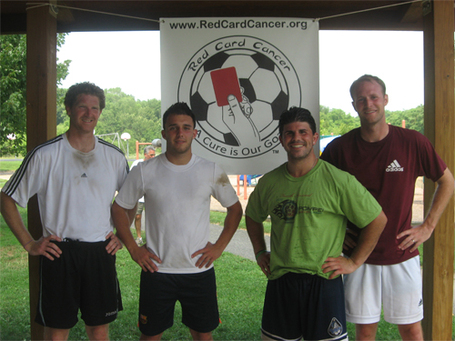 The first weekend in October 2009 was dedicated to Red Card Cancer. Seventeen teams participated, raising over $5,000 in a less than thirty-six hours.

"We didn't know where Red Card Cancer was headed at that point in time. It was something Paul wanted to do to honor Joe and Charlotte for their impact on the soccer world and the influence they've had on him over the years. As time went on Paul and I kept coming up with ideas for the campaign so I wrote down every single one that we threw out there. We presented them to Johns Hopkins Senior Program Developer and am proud to say many of the ideas will be put into play soon." - Jared Ferreria, Red Card Cancer

Red Card Cancer focuses on engaging the world-wide soccer community in the fight against cancer through various interactive programs for fans, players, coaches, parents and referees. Recently, Johns Hopkins University, D.C. United, and the U.S. Youth Soccer Association have expressed their support for Red Card Cancer as it begins to expand. Support has been on-going.

The relationship with U.S. Youth Soccer may be their key to success. In those conversations, resulted the idea of allocating $1 from every youth registration in the United States. There are over 48 million registrants each year, averaging $26 per player. Red Card Cancer has the potential over raising over $48 million, annually. 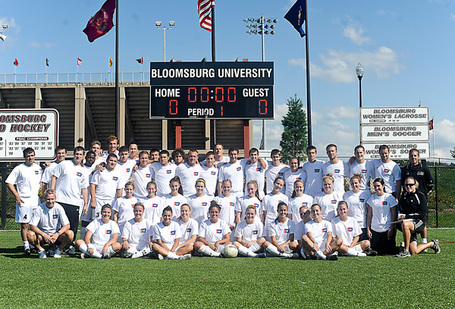 RCC has even gained the attention of LIVESTRONG CEO and President, Doug Ulman, a former NCAA Division soccer player himself at Brown University. Doug Ulman has provided some major feedback and ideas for RCC and eve expressed interest to collaborate with RCC in the future for a LIVESTRONG / Red Card Cancer tournament.

"Red Card Cancer's innovative approach of using the global sport of soccer to engage fans in the fight against cancer is certain to get us closer to our ultimate goal - a world without cancer." - Doug Ulman, LIVESTRONG CEO & President

How do I get involved?

RCC has reached as far south as Florida but the focus is currently in Virginia, Pennsylvania, Maryland and New Jersey. Despite limited resources in the first two years of existence, RCC has been growing quickly. The relationship with John Hopkins, D.C. United and the U.S. Youth Soccer Association will allow RCC to gain national exposure.

What else can we expect from Red Card Cancer?

"A beta version of a mobile app can be found on our website. The app will be available for download on iPad, iPhone, iPod. All proceeds will go towards RCC." - Jared Ferreira, Red Card Cancer

Announcements alongside John Hopkins University, D.C. United, U.S. Youth Soccer and LIVESTRONG will be made throughout 2011.