The New Year will undoubtedly be one of growth for soccer academies across the United States. Youth soccer and the development of homegrown players (i.e. Philadelphia Union’s signing of Zach Pfeffer) is key to the long-term success of the Men’s and Women’s National Teams, as well as Major League Soccer. The framework for soccer clubs and academies was laid in 2010 during the inaugural season for the Philadelphia Union and with the introduction of expansion club, Vancouver Whitecaps FC.

Vancouver will bring the European Club model to Major League Soccer in 2011. The structure of the club incorporates a professional first team alongside a developmental residency program and youth squads. Vancouver has seen success in the North American Soccer League from this model, while providing the club with a steady stream of players. The Whitecaps offer training to over 28,000 players throughout all levels of play and age groups. It is a program "expected to grow to 41,000 by 2014," according to WhitecapsFC.com.

The Whitecaps’ ‘Prospects’ program is the club’s youth academy, which provides training and competition throughout the year. The club itself subsidizes all training and program fees. Parents and players are only responsible for apparel and travel costs.

The Whitecaps model will be the envy of the league for several years, as we will see more and more MLS clubs moving to this structure.

Sporting KC (formerly the Kansas City Wizards) and the Philadelphia Union will be the next two clubs to organize under the European Club model in the States. The Kansas City based club has rebranded in an attempt to unite the major sports under one brand, similar to FC Barcelona. More about their attempt to follow in the footsteps of Barça is expected to be released in coming months. 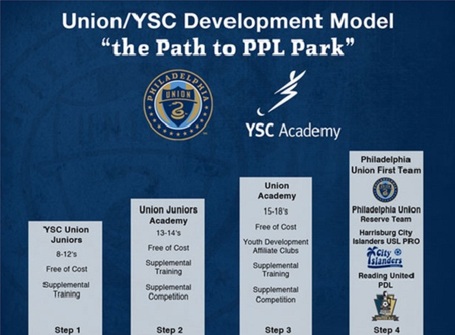 The Union, alongside its official youth development partner (YSC Sports, formerly known as Rocket Sports), have introduced the Union/YSC Development Model, better known as "the Path to PPL Park." The model provides the Union with access to existing indoor and outdoor training facilities, and an established youth program covering southeastern Pennsylvania.

Philadelphia’s affiliation with the Harrisburg City Islanders (USL PRO) and Reading United (USL PDL) provides the Union with teams at nearly every level of play. The teams have seen success in the promotion of players between squads in late season starter, Sheanon Williams, who excelled with Harrisburg before the move. The Union and City Islanders recently co-hosted open tryouts in order to identify players capable of training and competing at both levels of professional play. However, if the United States Soccer Federation and Major League Soccer introduce promotion and relegation, many of the relationships between MLS clubs with lower division teams will certainly be broken. 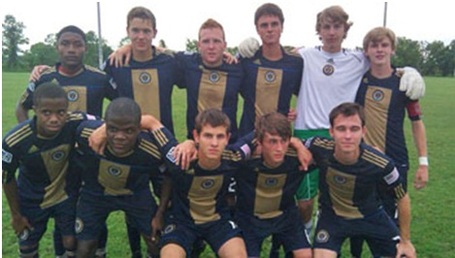 Similar to Vancouver, the Union provide elite training and competition at no cost to the players and, instead, are subsidized by the club.

The part that separates the Union/YSC Development Model from other clubs in the United States is their third phase, which has been identified as their ‘Youth Development Affiliation (YDA)’ program. YDA provides elite level clubs (known as US Soccer Development Academies and Academy Clubs) oversight from Union/YSC technical staff and access to training facilities, while allowing the Union to identify local talent. The ‘club-neutral format’ permits youth players to remain a part of the club, which he/she is registered.

In addition to the introduction of soccer academies, U.S. Soccer identifies talented youth for its national teams through state and regional Olympic Development Programs, as well as its own National Development Program beginning with the U-14 age group.

Formerly Project-40 (sponsored by Nike), Generation adidas identifies youth talent capable of professional play in Major League Soccer. It provides MLS clubs the benefit of signing players who will benefit the club, while developing at the highest level in the United States. Players do not count against the salary cap despite being paid above the league minimum, and are provided with funds for education if they opt to attend or return to college. Generation adidas provides supplementary competition with clubs including Real Madrid. Generation adidas will enter its seventeenth year in 2011.

The combination of local youth academies and national identification programs present promise for an increase in homegrown talent and incentive to for players to stay in the United States. The academy models in Philadelphia and Vancouver provide the foundation for the rest of Major League Soccer, United Soccer Leagues and the North American Soccer League.