SuperDraft Hangover: What The Philadelphia Union Looks Like Now 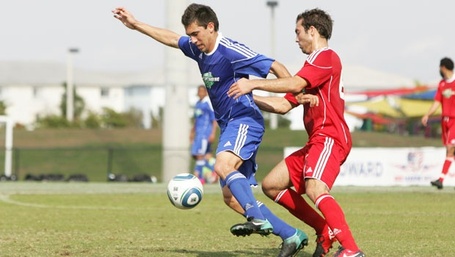 While the second season for the Union is still far off, this past active was an active one for the team.  The roster may not have been overhauled, but there have been some key additions that address some big needs. We've also had to say goodbye to a player as well.

While we've covered all of the recent movement on these here pages (links forthcoming for those who missed it, yo), I also wanted to get everything into one place so supporters know exactly where the team stands right now.

Here's the roster right now, player-by-player (and by position):

More after the jump...

Like a number of fans I was surprised at the Union's selection of MacMath in the first round, although I wasn't one of the guys pining for local boy Corey Hertzog either.  It's way too soon to say that the team wasted a draft pick, but two things are certain: they drafted for need and they choose the best keeper (and one of the best players) available in MacMath.

Speaking of MacMath, he is now the Union's fourth Generation adidas player.  The other three are forwards Jack McInerney and Danny Mwanga, and midfielder Amobi Okugo.  What is Generation adidas?  Read more here.

Lastly, the team also shed some deadweight this week.  the second year option on midfielder Toni Stahl was declined (relevant coverage).  This is the classic case of potential that was never realized, and most importantly, a wasted draft pick.  He was chosen in the second round last year.

Stahl didn't do much for the Union, as he only played in one regular season game last year.  He was sent off with a red card in the 41st minute against Seattle, and on more of a historical note, it would be the first time I'd utter a curse word at one of Philly players.  And there have been many more since then.

What's next for the team?  Do more players get a pink slip?  Who are the targets for the Supplemental Draft on Jan. 18th?  Does Mondragon finally become part of the team?