That was quick: Union officially sign Temple alum Noone 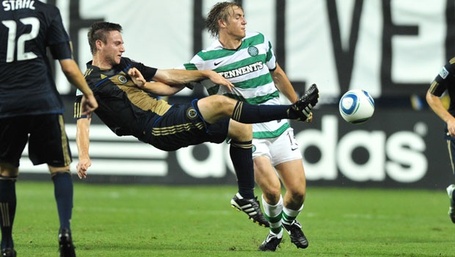 CHESTER, Pa. (July 29th, 2010) – Philadelphia Union announced today the signing of former Temple University midfielder J.T. Noone. For the past six months, Noone has been training with the Union as well as playing for the Harrisburg City Islanders, the Union's USL-2 affiliate. Per Major League Soccer and team policies, the details of the signing will not be disclosed.

Raised in Harrisburg, Pennsylvania, Noone has been playing for the City Islanders over the last few months thanks to a partnership formed last February between the Islanders and the Union. This relationship allows the Union to loan players to Harrisburg on a game-by-game basis for increased playing time. Noone has also been training with Philadelphia Union since preseason and saw playing time in the second half of the club’s first-ever international friendly against Celtic FC on July 14.

Noone is a familiar face to Philadelphia soccer fans, as he played in college at Temple. As the release says, he's been training with the Union since preseason but was shuttled to Harrisburg to play for the City Islanders in order to get him the playing time he needed to further develop. He's now a full-time player on the team -- frankly, it seemed like only a matter of time considering how much he was up with the club -- and, well, this just increases the Union's depth at midfield. Your guess is as good as mine as to the benefits this will bring for the club over the short-term, and I don't think this is the move some of us were expecting, but hey:  this team may not win an MLS Cup this year, but at least you can say "we're #1" in something -- roster space used on midfielders.