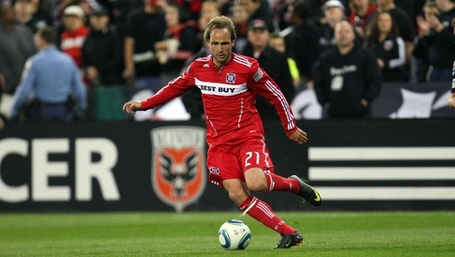 CHESTER, Pa. (July 26, 2010) - Philadelphia Union announced today the acquisition of midfielder Justin Mapp from the Chicago Fire in exchange for allocation money. Now in his ninth Major League Soccer season, the 25-year-old will be eligible to play for the Union when the team hosts the New England Revolution on Saturday, July 31st. Per MLS and club policy, terms of the trade were not disclosed.

Raised in Brandon, Mississippi, Mapp began his professional career with D.C. United in 2002 before moving to Chicago the following year. Known for his elusive speed and natural ability to shed defenders along the flanks, the young midfielder has made eight appearances for the U.S. Men’s Senior National Team. Mapp has also represented the U.S. at the U-20 and U-17 levels, making 16 appearances for the U-20 team and 88 (57 as a starter) with the U-17 squad.

In 2006, Mapp was named to the MLS Best XI squad, an acknowledgement of the best eleven players in the league in a given season. The midfielder has notched 15 goals and 40 assists in his MLS career, including a career high eight assists three times (2005, 2006, 2008).

Mapp has played in ten games this year with Chicago (started in six). He has registered an assist and two shots on goal over those 552 minutes, has committed 9 fouls and suffered 18 without receiving a yellow or red card. So the competition for a midfield spot grows, with Chacho Coudet, Miglioranzi, Fred, the injured Roger Torres, Jacobson, Okugo, Nakazawa and now Justin Mapp all vying to start for Peter Nowak. It was just a few days ago we asked if the then-newly-signed Chacho should start, but now with Mapp in the fold, the situation becomes a little more interesting.

Who should the Union start in the middle in New England on Saturday? Discuss in the comments, because trying to create a poll with all the possible combinations would be more than a little cumbersome.