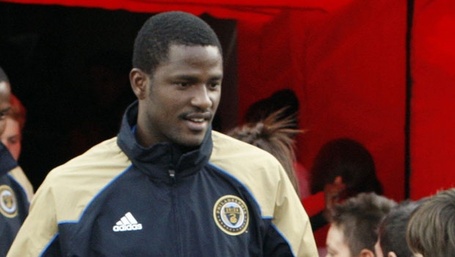 Philadelphia Union today announced the trade of Jamaican defender Shavar Thomas to the Kansas City Wizards. In exchange for Thomas, the Wizards sent Philadelphia two second round MLS SuperDraft selections, one in 2011 and one in 2012, as well as allocation money. Thomas, 29, played for the Wizards from 2004-2006.

The Union acquired Thomas from Chivas USA through the MLS Expansion Draft held on November 25, 2009. He made just one appearance with the Union, replacing Roger Torres in the 56th minute of Philadelphia’s 2-1 loss at Toronto FC on April 15, 2010.

And his lack of speed was ultimately responsible for Toronto's winning goal in that game. For a guy who played just 35 minutes of MLS play, this seems like a pretty good return. The Jamaican has 27 caps for their top-level international team since 1999.