I've played soccer for many years and have certain levels of acceptance when it comes to losses.  You're always disappointed when you don't win.  If a team beats you and definitely was the better team you just have to accept that.  This was not one of those games.  Toronto didn't beat us.  They weren't the better team.  The scoreboard read 2-1 in their favor.

Califf's red card changed the game just like Stahl's did in Seattle.  The fact that the captains red card gave way to a gift of a goal is infinitely more annoying.  Seitz should definitely had made that save or at least kept the ball in front of him.  Handling De Rosario (Sean Paul) that goal was wrong.  What Sean Paul did after scoring (if you can call that dancing; see below) was even worse and something the real Sean Paul would not approve of. 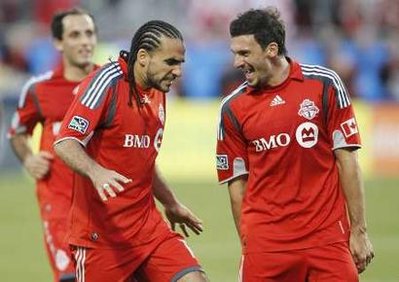 Philadelphia actually possessed the ball well and dominated most of the first half.  Toronto was lethargic and had what Rob Stone called a "fitness issue."  Giving up that first goal was big.  The fact that the Union could play down a man, keep their cool and pass their way into an excellent Harvey goal before half was more than promising.  We can control the game if we'd quit digging ourselves into crazy situations.

Toronto played so bad in general that the announcers joked that if you were just tuning in you wouldn't know that Philadelphia was down a man.  This wasn't a good match.  There was only so much we could do with 10 men.  We had a few good chances but it wasn't enough.  Subs midway into the second half showed the strategy shifted to defense and keeping this thing a 1-1 tie.

The final red card in this awful example of officiating sealed the deal giving Toronto FC a penalty shot at 80 minutes.  Seitz came out to play the ball and got some of the man.  Honestly, I don't know what else Seitz is supposed to do there.  The ball was pushed forward at the last second, he doesn't get it and continues to slide on the terrible turf.  I didn't think it was a penalty but given the precedent set by previous calls in the game and an Academy performance by all of Toronto's team I wasn't surprised when the game was handed to them so easily.  De Rosario took the shot and was the hero of the game.  Two gifts that shouldn't really have happened.  He could have a had a third goal late but missed a wide open net.  Man he really is great!

I have an idea: lets never think about this game again and move on with our lives.  We'll all be better off for it.

Also, what the hell was with Toronto fans throwing bottles and streamers at visiting players while they take corner kicks.  How is that allowed?  As pointed out in the game thread: had that gone on in Philadelphia we would never hear the end of it.  The field looks like a landfill with garbage everywhere and it played like one too.

Lets build up our hate and hope for the next game against the villain New York Red Bulls on April 24th.  Ah crap I just remembered: Califf is out for that one.  Serenity now.  Serenity now.