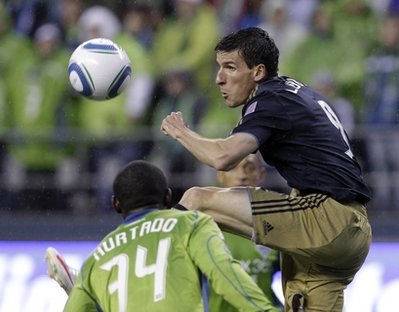 The Philadelphia Union fell to a superior team tonight in Seattle.  They didn't make it easy on themselves.  They lost their cool and played many through balls straight out of bounds.  4 yellow cards and a red in the 40th minute dug a deep hole that was just too much to overcome.

Despite many self imposed errors, there were some very positive signs of good play.  The Union controlled the ball during the first 10 minutes and were able to maintain possession.  There were glimpses of good ideas and touch.  Le Toux demonstrated his offensive value when given the chance to control play.  I think he might be of better use as a conductor in the center mid position rather than up top.  Torres was able to make a few things happen on the outside and clearly doesn't think twice before going into a 50/50 ball.  Overall the Union showed that they are capable of slowing down the game, controlling the ball and seeking the right opportunities to create.

Seattle's first goal at 12 minutes definitely stole the momentum away as their play picked up.  The Sounders counter attack and use of space on offense really cut through our midfield and defense.  Union backs were getting turned around by the quick field changes and mismatched for Seattle's speed of play in certain instances.  The inability to adjust and nerves of this first game likely contributed to an overly agressive style of play that the defense felt they had to play.  This all came to a head in the 40th minute when Stahl received his second yellow and the Zolos were forced to play a man down.  Seattle would score a few minutes later on an odd sequence and the game would never recover its energy after that goal.

The uber-agressive play is something that has carried over from the Union's last exhibition with FC Dallas where they acquired 3 red cards in another 2-0 loss.  In my experience the need to be agressive comes out of frustration or need for an edge.  Knocking the player off the ball in a solid way is fine; getting carded is not.  It just seems that the Union lose their focus a little too easily in this way.

The second half was much better than the first.  Philadelphia's defense was able to hold on despite being a man down.  Seattle had their chances but wasn't able to finish.  They were also a bit flat in the second, comfortable with their lead.

Overall, the first Union performance was okay.  The red card really killed the speed and circumstances of the game.  Playing a man down didn't allow the team to really work themselves out fully.  The good news is that most of the faults found in this game were self-imposed and are fixable things.  We have to cut major slack for the first game of a new franchise that has only been together for a few months.  Clearly the team has some intra-player communication issues to work out and it will simply take time for them to gel.

Also, whoever decided to have the first game of the MLS season in Seattle during March should be fired.  The conditions were terrible and entirely expected for that climate during this time of the year.

The next game is April 10th at home versus D.C. United.  Hopefully the next two weeks will allow the Union to regroup and get fit for the next match.

Philadelphia has an MLS team and I love it.