Share All sharing options for: In The Beginning: March 25 - May 8

In our previous installment of recapping the Union's first season, we discussed how the Sons of Ben spurred the creation of the franchise, as well as the formation of the club's front office and coaching staff, how the opening match roster was developed through the expansion draft, SuperDraft and independent trades and acquisitions, and how the team performed in its first official matches in preseason action. With all of that completed, it's fair to say that both the organization and fanbase were more than ready for First Kick in Seattle. 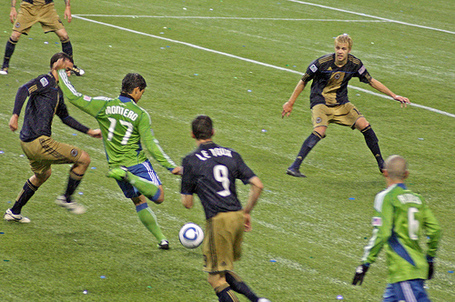 At just after 9:56 PM on the East Coast, the Philadelphia Union and Seattle Sounders kicked off the 2010 MLS season in front of 36,241 (including a cluster of traveling Sons of Ben) at Qwest Field. And at just after 9:57 PM, Union captain Danny Califf registered the franchise's first ever yellow card against. The overaggressive example Califf set would become the norm for the Union not just for this match, but for the first half of the season. Despite a shaky start, the Union rounded into form relatively quickly and within the first ten minutes began to control possession. But in the 12th minute, Seattle's Brad Evans took a perfect pass in the box from Fredy Montero and beat Chris Seitz to give the Sounders the season's inaugural goal. In the 40th minute, Tony Stahl received his second yellow card of the match and a red card ejection for tackling Montero away from the ball, dropping Philadelphia to ten men for the remainder of the match. Being outnumbered would hurt Philadelphia but three minutes later, as Montero, kept onside by Jordan Harvey, was able to get his head on a bouncing ball from Osvaldo Alonso just inches from the goal-line, giving the blue-and-green a 2-0 lead going into halftime. The second half was much quieter, with the 10 Union men settling fairly comfortably into a defensive shell against a Seattle side that was more than willing to hold onto a two to nothing lead for 45 minutes. Final: 2-0 Seattle. 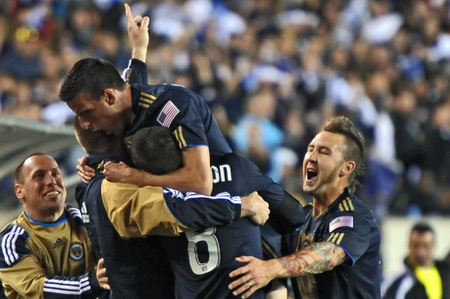 After losing their first match at Seattle, the Union returned home for the first of two home openers they would have this year. On April 10, in front of Vice President Joe Biden, Philadelphia Mayor Michael Nutter, Philadelphia soccer legend Walter Bahr and 34,870 fans at Lincoln Financial Field, the Union recorded their first ever win in MLS action against DC United, with Sebastien Le Toux scoring the Union's first ever goal just four minutes in at the six-yard line, getting his head on a Roger Torres cross from the far side. It would be just the beginning of Le Toux's night and season, as he added two more, including a tie-breaking score for the hat trick on a free kick in the 80th minute, to propel Philadelphia to take full points for the first time. Final: 3-2 Philadelphia. 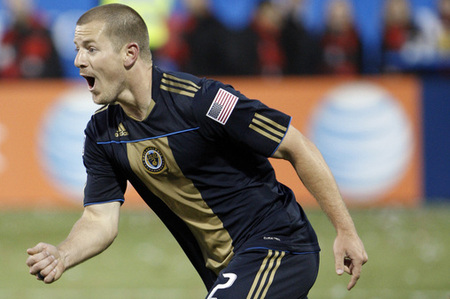 Five days after opening their home slate, the Union traveled up north to take on Toronto FC at BMO Field. Likely riding a high after that thrilling victory, Philadelphia largely controlled the pace for the first half-hour, but momentum shifted in an ugly way in the 34th minute as Danny Califf was given a straight red card for unnecessarily clotheslining Toronto's Julian de Guzman. On the ensuing free kick just 22 yards from goal, Union keeper Chris Seitz -- who was at times shaky against DC -- got his hands on Dwayne De Rosario's low strike, but he couldn't prevent it from sneaking by for a 1-0 Toronto lead. Despite being down a man (again), the Union leveled just into stoppage time in the first half with Jordan Harvey converting on a Roger Torres cross into the box. Could the Union actually pull this off and steal a point (or three) on the road with ten men? The answer was an agonizing no. In the 80th minute, with the possibility of getting a decision seeming more and more realistic, O'Brian White slipped past Philadelphia's Shavar Thomas trying to get to a pass that was just ahead of him, forcing Chris Seitz to charge out after the ball and ultimately trip White inside the box. The penalty spot was pointed at by match referee Baldomero Toledo, and De Rosario buried the PK to give Toronto a lead that they would not relinquish in the remaining ten minutes. Final: 2-1 Toronto. 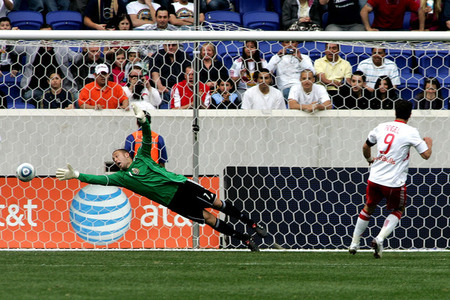 Having defeated regional rival DC United at home, the Union were next at Red Bull Arena in a match against their other local combatant, the New York Red Bulls. Hundreds of Sons of Ben and other Union fans took the trip up the turnpike to watch the newest incarnation of a Philadelphia-New York rivalry (you can even see two or three Union fans in the picture above, right at the top). After a rather perfunctory scoreless first half, Salou Ibrahim headed in a Jeremy Hall cross in the 50th minute to give New York a 1-0 lead. Nine minutes later, however, Fred got the ball from the center circle to Alejandro Moreno on the near side, who charged into the box with the ball and sent a perfect cross to the far side, finding a streaking Sebastien Le Toux who leveled for Philadelphia. Once again, Philadelphia was playing well and holding form, and it looked like they were on their way to getting a well-deserved road point, if not three. But, once again, a Union defender made a mistake that cost the team a result. This time, it was Michael Orozco Fiscal, who misjudged a Brian Nielsen cross into the box, getting it with his arm instead of his head. Juan Pablo Angel buried the ensuing penalty kick, and despite numerous chances for Philadelphia and 17-year old Jack McInerney as the match wound down -- even well into stoppage time -- it was not enough. Final: 2-1 New York. 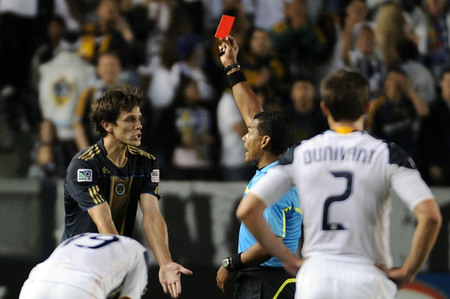 After dropping a mid-week rematch at New York in U.S. Open Cup qualifiers 2-1, the Union made their first cross-country trip to go against Landon Donovan, Edson Buddle and the Los Angeles Galaxy at the Home Depot Center in Carson, California. This, suffice to say, was not a pretty match for Philadelphia. Even before the confetti released to celebrate the opening kick had finished falling, Los Angeles took the lead, with Buddle sending a cross through the six-yard box to a sliding A.J. DeLaGarza who gave the Galaxy the lead just fifty seconds into the match. Off a corner kick in the 28th minute, Chris Seitz made a tremendous stop diving to his right on Alan Gordon, but he couldn't hold onto the rebound, and after an attempt from Buddle was blocked by Michael Orozco Fiscal, Buddle got it again and chipped in his 8th of the year to give LA a two goal lead. In the 45th minute, the Galaxy more or less put the match out of reach as Donovan on the far-side of midfield got the ball to an unmarked Buddle who was in all alone on Seitz from the top of the box. He beat the helpless 'keeper to make it a three goal deficit for Philadelphia. It didn't get any better, as in stoppage time -- just a minute and a half later -- Stefani Miglioranzi was shown a straight red card for a dangerous tackle of Juninho in midfield. Jack McInerney, however, somewhat salvaged this match for Philadelphia and its fans, scoring his first career MLS goal after receiving a pass at the top of the box from Fred on a virtual 2-on-1 in the 84th minute. Final: 3-1 Los Angeles. 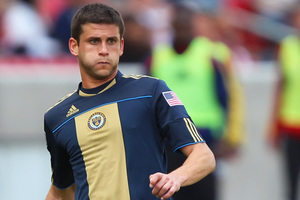 It didn't get any easier for Philadelphia, traveling to play at MLS Cup runner-up Los Angeles, then a week later at defending MLS Cup champion Real Salt Lake. Rio Tinto Stadium was relatively empty with the match rescheduled from a night start to a mid-afternoon start at seemingly the last possible second to accommodate for a Utah Jazz playoff game, but while the atmosphere wasn't what it usually is in Sandy, Utah, the intensity on the pitch didn't seem to be any worse for wear. The Union controlled stretches of play early, but were unable to convert on several high-quality opportunities in the first twenty-five minutes of play. The tide, however, would turn quickly as Philadelphia would have another unfortunate defensive miscue. In the twenty-sixth minute, Cristian Arrieta's backpass from the far-side of the middle third of the pitch to seemingly nobody was intercepted by Álvaro Saborío inside the Union box, who moved toward the middle before the ball was tackled away by Jordan Harvey, but it went right to Kyle Beckerman who one-timed it past Chris Seitz. In the 50th minute, Arrieta again was at fault, as he tackled Will Johnson just outside the near edge of the Philadelphia box. On the ensuing free kick, Roger Torres, who was making up the wall with Fred, appeared to duck away from Javier Morales's cross -- the exact opposite of what one is supposed to do when making up a wall -- and the ball went into the middle of the 6-yard box where Chris Seitz dove forward to get onto it, but he could only get a piece of it before Jamison Olave made it a two goal lead. Finally, in the 70th minute, a leaping Álvaro Saborío at the top of the six-yard box was able to get his head on Paublo Campos's cross from the far edge of the Union box. The remaining twenty minutes of this match, outside of some eye-opening service from Kyle Nakazawa, were mellow as Real Salt Lake strolled rather casually in taking full points at home against the Union. Final: 3-0 Real Salt Lake.

And so with that, the Union finished their first stretch of MLS action with a record of 1-5-0. Certainly not optimal, but the fanbase and team alike had optimism going forward, with the second home match at Lincoln Financial Field coming up on May 15 against FC Dallas, and the opening of PPL Park, with the long homestands that would follow, just a month and a half away.